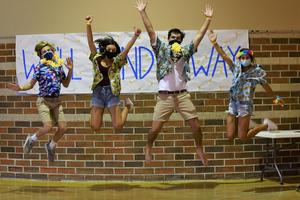 It’s that time of year when the torch is passed. But we’re not talking about the Summer Olympics. Soon, the Saint Thomas Aquinas student body will be electing new Student Council Executive Officers for the 2021-2022 school year. But before they pass the torch, let’s take a moment to recognize the ‘Olympic’ year our 2020-2021 Executive Officers had to overcome. Despite the challenges faced with COVID-19, these four ‘execs’ presented a winning combination of optimism and realism. There were no guarantees, but they were determined to make the best of it. The example these four officers set will stand as a testament to the spirit and community of Saint Thomas Aquinas High School for many years to come.
To begin, the entire 2020 Spring campaign and election process was done virtually on social media, speeches were recorded on Zoom and made available on the school website. Once elected, our four officers met outside (socially distanced of course!) over the summer with moderators in Stoll Park to plan for the school year. The theme, “We’ll find a way” came out of the summer talks and it was part of every decision going forward.

In September, we were back in school on a hybrid schedule. Yet they still managed to keep a ‘well-oiled’ system running: starting with the election of Class Council officers, quickly followed by Homecoming week and a memorable outside assembly with the traditional “hallway decorations” under awnings at the entrance doors. In November we had a hugely successful Canned Food Drive, “Candemic” which gathered the third highest total in school history with 136,057 items. This year they will finish with the Spring Olympics that will feature more events and an outdoor assembly unlike any other year before it.